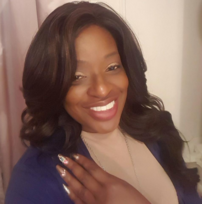 Impacting lives and communities with a new style of Etiquette & Elegance.   Urban Etiquette 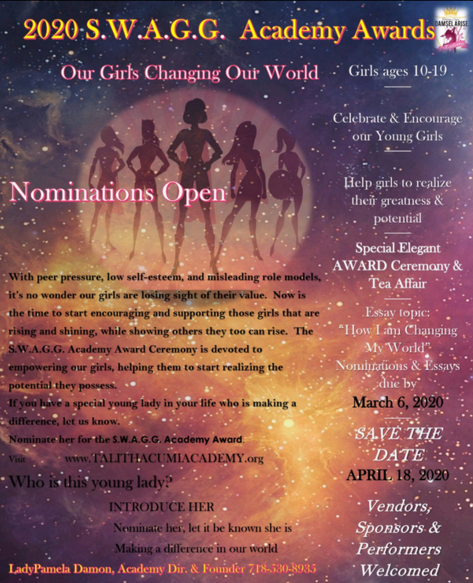 LadyPamela Damon,  is the Founder and Director of Talitha Cumi Urban Etiquette & Leadership Academy, located in the Bronx.  With a background in marketing, wedding planning, program management, etiquette training, customer relations and corporate planning, LadyPamela has had the unique opportunity to serve others.

For over 15 years, she has answered the call to train, guide and restore God’s daughters.  She has devoted her life to IMpacting our next generation of leading ladies.  Through spiritual guidance, conducting hands–on leadership and etiquette workshops, hundreds of young ladies’ lives are transformed.  Some of her past Princesses are now Teachers, Law Enforcement, Nurses, Professors, Models, Beauty Advisors, Entreprenuers, Actresses, Producers Physical Trainers, several are studying abroad and dozens are enrolled in various colleges throughout the United States.  A great number of our past members are active mentors  in our current programs.

In 2015 the words "Talitha Cumi" was placed in LadyPamela's spirit.   Talitha Cumi in Hebrew means Damsel Arise.  A light burst forth and Talitha Cumi Urban Etiquette & Leadership Academy was born.  The academy is designed to empower and impact our youth, providing  the necessary skills, tools, and confidence needed to become leaders.   Breathing life and rising sleeping leaders has become LadyPamela’s passion.  LadyPam (as she is affectionately called by her girls) sees beyond the outer appearance of our youth and looks to the inner potential they all possess.
Over the last few years LadyPamela has been featured on several local television shows as well as in news articles.  She has obtained several certifications and certificates in the field of youth development, mental health, healthy relationships and etiquette training.  LadyPamela is always looking to broaden her scope of knowledge and information.   In 2019 after receiving numerous awards, plaques and certificates LadyPamela was surprised with a Proclamation from our 36th District Senator Jamaal Bailey recognizing her work with young women.  This Proclamation has spurred her on to reach further, do more and shine the light of grace, elegance and hope on young girls.

Talitha Cumi Urban Etiquette & Leadership Academy is a pioneer resource for our youth.  The academy provides real world etiquette training, career & life skills development, image consulting and a multitude of other resources to youth who would not ordinarily take part in this type of training.  We have coined the term Etiquette with S.W.A.G. G. “Sophisticated, Wise, Accomplished, Graceful Girlz".  Our programs are interactive, fun, educational and REAL.  Talitha Cumi Academy has brought etiquette back into style.  We have a large collection of programs designed for all ages and stages ranging from Pre-Debutante Training for young girls starting as young as 7 years old to our Young Women in Leadership Course for women 20-35 years old.  Within two years of bringing Talitha Cumi Urban Etiquette & Leadership to the Bronx, LadyPamela has worked with over 40 young woman, hosted several elegant tea parties, coordinated a Evening of S.W.A.G.G. Award ceremony where over 25 girls from the 5 boroughs were recognized and celebrated at a spectacular award ceremony.  During this ceremony one of the Talitha Cumi Academy member received a Proclamation from then NYC Public Advocate, now current Attorney General for NYC Leticia Jame, for her outstanding work of collecting and sending over 50,000 pairs of shoes to African.  LadyPamela encourages her girls to think outside the box and become community change agents.
In 2018, several members of the academy traveled to Washington , D.C. to speak in front of congress about our concerns with several internet pages promoting sex trafficking.  Our voices were heard one of the internet pages we were fighting against was shut down.    Our girls are very community and politically focused.  They are determined to impact their generation.

2018- 2019 has been a whirlwind of activities:
Coordinated the Human Trafficking Awareness march
Handed out Christmas Toys at several Special Needs Schools
All members opened a bank account
Several of our S.W.AG.G. members received their Certification in Baby Sitting from the National Association of Pediatrics
Went to the United Nations for the International Day of the Girl
Helped coordinate with Dr. Johnnie Goff, Fashion Flare Back To School Fashion Show
Coordinated and Hosted the first ever Bronx After Women’s March Celebration
Attended the Pink Shoe Breast Cancer awareness party
Participated in Senator Jamaal Bailey’s Black Excellence Showcase
Backstage tour of the Metropolitan Opera House
Enjoyed an evening of dramatic readings and a moving panel discussion “Black Girls are from Outer Space”
Hosted our Annual Debutante Cotillion.
Organized and Hosted UnMasked the Empowerment Day Conference
On Saturday, May 18 the girls had the distinct honor to be Hostesses at the Grandparents Around the World Gala, with over 400 attendees.
Answered the call to attend countless events and community functions
Prom and Beyond Expo,  100's of new or slightly used dresses, shoes and services were donated.  High school girls had the opportunity to select their prom attire free of charge.  This event was co-sponsored with Senator Jamaal Bailey and Assembly woman Nathalia Fernande
This was just a small sampling of the way the girls were engaged within our community.

Our programs can be tailored to meet your youth wherever they are, in schools, in community centers, in court mandated programs, and of course your church.  We encourage you to reach out to LadyPamela to speak further about having Talitha Cumi  Urban Etiquette & Leadership Academy impact your special youth.